You are here: HomenextPublicationsnextBookletsnextBristol Politics in the Age of Peel, 1832 - 1847 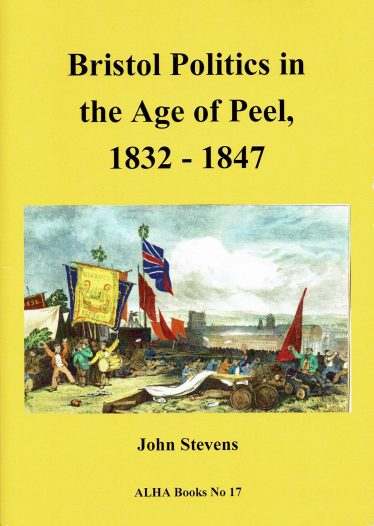 In the period following the Reform Act of 1832 Bristol voters still had two votes each and cast them openly. But the parties were changing: old Whigs and Tories still flourished, but Liberals and Conservatives were instituting or accepting reforms in every branch of national life.

Bristol itself was of course particularly involved in the abolition of slavery and municipal reforms and shared the national concern with Corn Laws and Chartism. And then, as always, there were personalities … a thoroughly documented account of a fascinating era.

Now out of print but may still be available direct from the author, on Amazon, or second hand.

John Stevens was born and bred in Dorset and educated at the Dorchester Grammar School and Downing College, Cambridge, where he read law. He has lived in Bristol for over thirty years and for most of that time was a Solicitor in government service. His interests other than history include music, non-league football and watching old westerns.