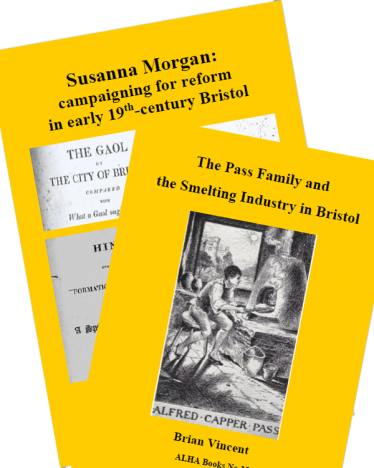 We are pleased to announce the 34th and 35th title in our Booklet series:

After the end of the Napoleonic Wars, Britons were increasingly aware of many social ills; and this awareness contributed to the great wave of reforms which followed the passing of the 1832 Reform Bill. One of the most active of Bristol’s campaigners for reform was Susanna Morgan. She wrote and published on several major causes, and took an active part in new institutions. But, as a woman, she often remained anonymous in her time and so has been mostly overlooked since. Here Michael Whitfield tells her remarkable story; with sketches of some of the other active women who were her friends and colleagues.

Michael Whitfield was Senior Lecturer in General Practice in the University of Bristol. In retirement he has devoted himself to the history of medical practice and practitioners in eighteenth- and nineteenth- century Bristol, and is the author of many ALHA books.

The Pass Family and the Smelting Industry in Bristol

The Pass Family was a very successful family firm operating in Bristol until after World War II when it was taken over by RTZ. They were in the smelting business, mainly recovering metals from previous working. They were not technological innovators; but Professor Vincent’s history demonstrates the technical developments of the industry interacting with the dynamics and financial constraints of a family firm.

Brian Vincent, Ph.D, DSc, FRSC was formerly the Leverhulme Professor of Physical Chemistry at the University of Bristol and is currently an emeritus professor and a senior research fellow in that department. He has published more than 300 original scientific research papers, review articles and books. He has also written and lectured on the history of science, medicine and technology in the Bristol Region, including the following ALHA titles: Chemistry in Bristol into the early 20th Century, The Herapaths of Bristol – a Medical and Scientific Dynasty: The Butlers & the Coal-Tar Distillery at Crew’s Hole.

Our books are sold at Bristol Record Office and other outlets depending on local interest, all at £3.50 except Nos.10 & 20 which contain an A3 map and are £3.95. Books can also be ordered by post but please add 65p per title for postage.

To order books online, and pay by card, please go to our page on GENfair

To order by post use the printable order form found here